"Alexi, what is all the commotion?

"It's Father! He said, he said I'm getting married!"

June paled and closed her eyes for a moment. "Sit down, daughter."

"Sit down! How can I sit down when father is destroying my life!

June sat down and waited for the dramatics to stop.

Finally Alexi crumbled onto the bed in a mix of fury and what seemed to be fear. "How could he Mother? I know you won't let him marry me off to a strange man."

June was silent as she collected her thoughts. This caused Alexi to stifle her sobs and prop herself up. "You, Alexi Mae, are the child we prayed and prayed for, our one and only."

"The problem is because you are our one and only we didn't tighten the reigns as we should have. You've always been a spit fire, a quality your father admires."

This brought a smile to Alexi's face. She had always been the apple of her fathers eye; and she knew it.

"You see, your father and I haven't been pleased with your actions of late. We have spoken to you until there is nothing left to say."

June had her daughters attention. Alexi moved to the settee along side her mother.

June took her hand and continued, "We've been praying and waiting for you to mature."

Alexi groaned, "Oh Mother, please tell me you are not on board with this nonsense."

"Your father spoke to me about this matter Monday evening. I've been praying and gave him my blessing this morning. Alexi, it's because we love and care about your well being."

"So, who is the lucky man?" said with as much sarcasm she could muster.

"You will meet your suitor at supper Thursday evening. Please, please be on your best behavior." pleaded June.

Alexi didn't go down for dinner. She spent the afternoon in her room alternating between tears and anger. The problem was she wasn't sure if she was angry at her father or herself.

After a quick bath she dressed for supper. She made sure to leave her hair down as she knew how much her father loves her curls. She'd need to pull out all of the tricks to get out of this one.

The air was so thick at dinner that it could have been cut with a knife. June did her best to make polite conversation. Alexi tried to join in, but no matter how hard she tried it ended up in silence.

Finally Richard broke his silence. "Alexi, I hear your mother told you there will be a guest for supper tomorrow. I want to reiterate that we expect your best behavior."

"Why Father, are you afraid I might scare him off? Alexi said with a smirk.

"Tom is a decent man, I refuse to allow you to disrespect him or me."

"Tom?" Alexi repeated as she thought. "NO! You don't mean Carl Jenkins nephew?"

"Tommy Jenkins is old! He lives at his uncles farm. Please tell me you don't expect me to move to a farm and take care of his uncle too!" Alexi said with more force then she intended. One look at her father and she saw storm clouds.

"Tom is only 28.  Five years older than you. He only seems old because he is a mature man. More then I can say for you and the people you run around with. Sunday was the last straw. I will no longer be embarrassed by you!" Richard raged.

"You think it's okay to stay out doing God know what with God knows who until late into the night on Saturday. You are barely presentable at church. Last Sunday you didn't even try. Telling your mother you had a headache and then joining my dinner table smelling like stale cigarettes and beer." Richard banged his fist on the table.

"I will not tolerate you to embarrass this family and certainly won't have our guest leaving here speaking about you like you're a Trollip!" Richard pushed his chair away and stood.

"Another thing, you will be married in 30 days. Tom will be your husband unless you bring home a suitor suitable according to my standards. Alexi, I love you. I really do, but daughter, it's time."

June quickly excused herself to see to her husband. Her father had never spoken to her that way. Alexi sat stunned.

After what seems like years of hot and humid weather we finally had a cool down! That meant it was time to have some outside fun.
The weekend started off at the Indiana State Fair. So many sights to see. In fact, so many we didn't see them all. We all had a list of must see items. I only wanted to see the high diving show. It didn't disappoint.
See that tiny platform just below the flag? 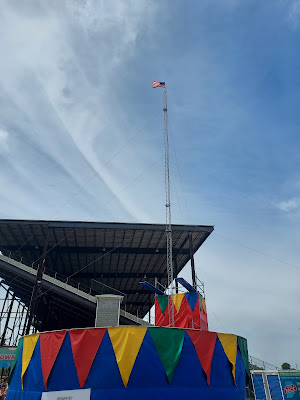 Yes, someone dove off of that. You must be crazy to jump from this high into a 10 feet deep pool! Not for this girl!! 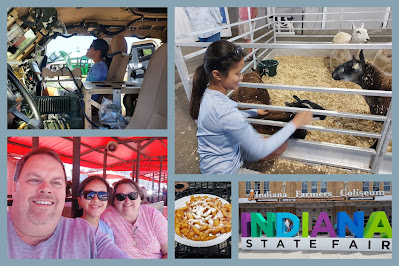 Saturday was an at home day. I spent time giving my flowers love. They all needed some TLC and to be fertilized. 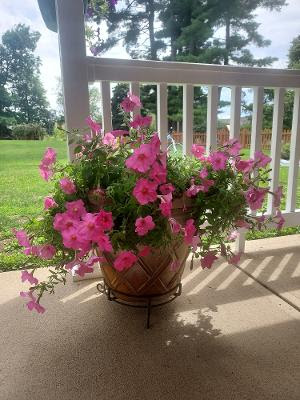 Do you ever start a project and it becomes one thing leads to another type of thing? Yes, that is what is happening with the work on our barn. The siding was rotting and is being replaced which led to floor needing replaced. So far, it's been replaced enough in order for Chuck to finish the siding and install the new door. 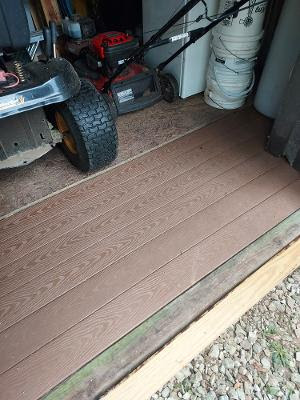 When thinking about this project we have been thinking about the future. If we had used treated wood then it would need to be replaced again. We opted to use products that should outlast us. The floor will now be out of PVC decking. 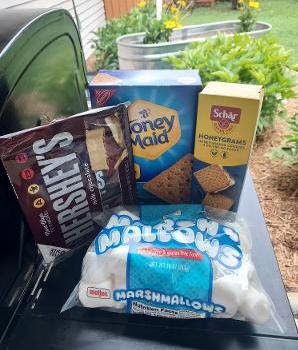 The plan was to end the evening with a fire. The fire was going and the yummies were purchased. Then, rain. Just enough that the fire was put out. Then of course it stopped. Oh well. I'll be ready for the next nice evening.
Sunday Chuck and I snuck off for a late lunch. He was being quite silly while we were out! 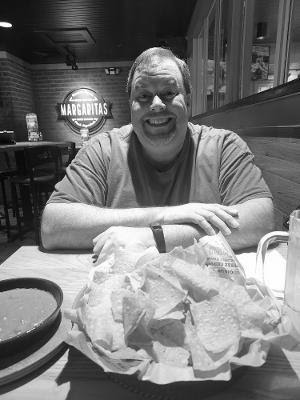 We both were fighting headaches. Once home I took a nap and he watched some television. It was a wonderful weekend.
Have a great week!
Posted by Wendi at 8:00 AM 2 comments:

Not sure about your area, but it's HOT here. Saturday evening we went out to cut grass about 6:30 and it was 93* with heavy humidity. Chuck trimmed while I rode the mower. I watered flowers when I was done and was beat when I came in. Whew! All of the heat gives me no desire to cook. 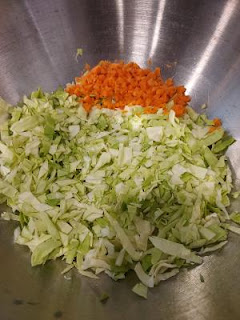 Of course, I must feed my family. Eating out all of our meals isn't in the budget. I have been making quick items and avoiding the use of the oven. 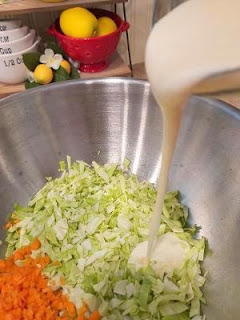 The crock pot has been a life saver.  I put a pork roast in for pulled pork, made cole slaw to cool in the refrigerator and served with potato chips. 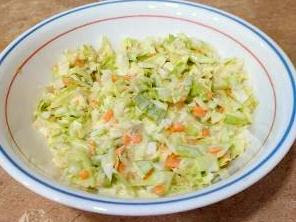 My go to recipe for cole slaw Chick-fil-A. Long time readers might remember that worked there for years. I have made this recipe countless times. A little secret is that they use Kraft Mayo. 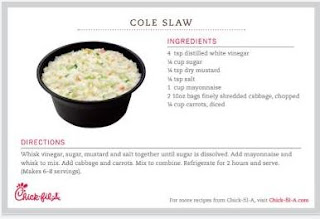 I'd love to hear your beat the heat recipes.

Last week I accompanied Chuck on a business trip. Don't get too excited. We stayed near the Cincinnati airport, which is actually in Kentucky! 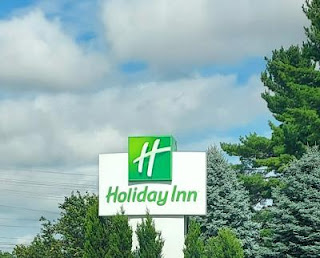 Sadly the hotel didn't have breakfast included. After looking at the restaurant menu I decided I would eat in the room. The prices were outrageous, which is to expected. This was my breakfast of champions! 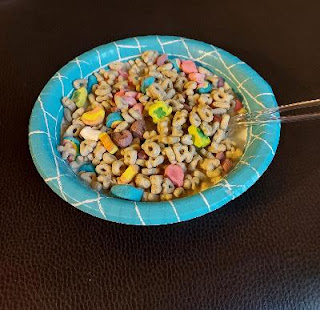 I enjoyed a beautiful view! Ha! 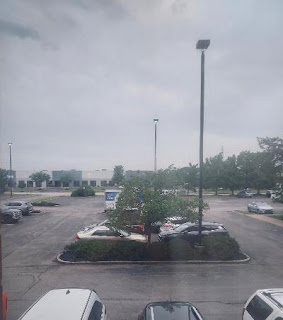 The room had a very nice desk. I took along all of the school books and was able to get most of this years school planned. Yes! 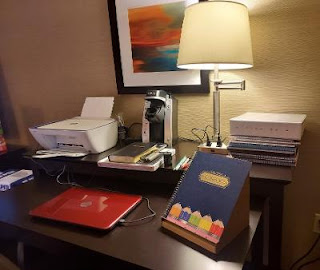 While I was working on school was able to watch HGTV and Hallmark. Christmas in July! Who doesn't enjoy the Christmas movies.

The room was nice until you got into the shower. It was super creaky!! You would climb in and everything was fine. As soon as you would move it was creak, creak, creak. I asked Chuck if he noticed anything about the shower and he immediately said, "The creak." Yes! I told him I feared I would end up the room blow us! Seriously, I didn't think that would truly happen, but it did give us a good laugh.

There was a nice town not about 15 minutes from the hotel. The first day we ran there for a fast food lunch. An hour wasn't enough time and we were in a rush so Chuck wouldn't be late for class. We ended up hitting a grocery store and had lunch in the hotel the rest of the week. 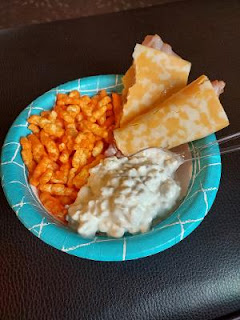 That is except for one day when I ventured off by myself.  While blogging I have interacted with some ladies that have become friends. I was finally able to meet one of those ladies. 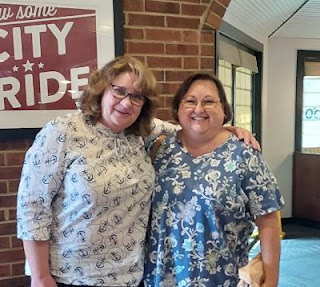 Meet Kathy! She no longer blogs, but we have been able to keep up on Facebook. She is just lovely! She has a cute southern accent and we hit it off like we had known each other forever. We talked and talked for about 2 1/2 hours and could have chatted longer. She's super sweet and it was great to connect with a kindred spirit! The highlight of my trip. *smile*

Hotel life meant we dined out every evening. I know to a homemaker that can sound like heaven. Honestly, I was sick of eating out by the time we left. We tried to hit local places. 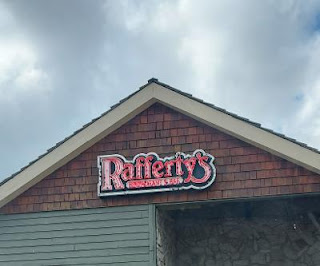 This restaurant had the best cheese fries we have ever had. You know so many places put cheese on top and the fries on the bottom are just fries. This place had cheese all through the bowl and big chunks of fresh bacon. Yum!

While we were at the hotel Megan was 40 minutes away living her best life. This is one of the views she enjoyed for the week. 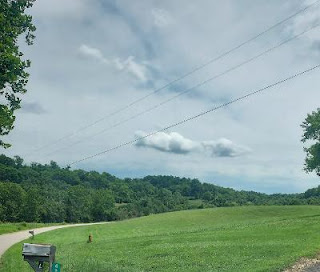 She stayed with a cousin and had the best time fishing and roaming the countryside. She even brought some of the fish she caught home.  Thankfully they were already cleaned! We invited my parents over for dinner and enjoyed a fish fry. 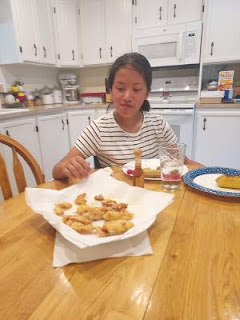 It was a wonderful week. Chuck and I had to reconnect and Megan was able to make life long memories. As great as it was to get away, there is no place like home!