Please remember this is a NO judgement zone.  You don't like what you see then please be kind and say nothing. *smile*


I headed out for my monthly grocery shopping recently.  I ended up with quite a bit of fruit on hand after a trip to the orchard and there is plenty of meat in the freezer.  I went to Wal-Mart, Sam's Club (for trash bags only), and Kroger. 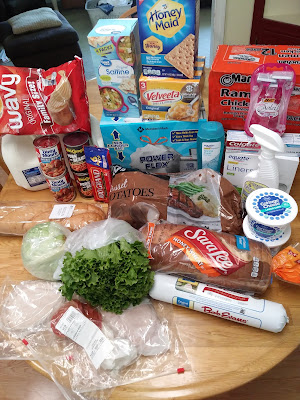 Later I picked up 2 packages of toilet paper and a large package of paper towels.  (sorry, no picture) The total was $50.97 + a $10 gift card for a future purchase.  That makes the total $169.05.  I will use the rest of my grocery budget for milk, fresh items, and any loss leader deals this month. 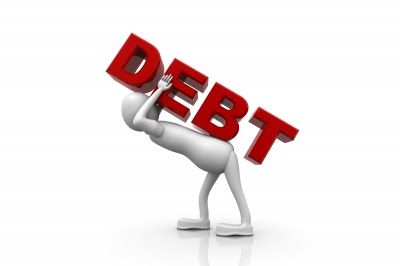 The new debt total for September is $16517. Certainly not dropping as fast as I'd like. When I consider that we spent money on plywood for Grandma's floors and we ate out some due to late nights working,  I won't beat myself up about it.

The old adage that every penny counts seems to apply more and more these days.  I find it's much harder to stretch my pennies into nickles. *smile* I find it encouraging to see grocery hauls and hear about others frugal adventures and I hope you do also.

We've been busy and I didn't realize how long it had been since I updated my little space here. There have been a ton of things happening. We have been busy with school, making memories and most importantly serving. You see, Chuck's grandma has taken a turn. As of last week she is now on hospice care.

She had been slowly declining, but really took a turn two weeks ago.  She is now to the point where she is no longer mobile on her own.  Her eldest daughter, Brenda, moved in with her several years ago and has been a huge blessing.  Since Grandma is to the point that she is no longer able to stand up and take steps it now requires two people to be with her at all times.

To make moving her from point A to point B easier, Chuck and a couple of his cousins have been ripping up carpet and installing wood floors.  As with any project, especially when it involves a home build in 1920, there are bound to be hiccups.  As you can tell by the picture a hallway was more entailed than just ripping up carpet and putting down the new flooring. 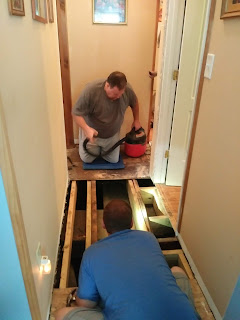 I don't have a picture of the new flooring, but it is pretty and was FREE!  Yup, free.  Uncle Tom had a friend that bought a house and hated the floor.  Tom was able to take the flooring if he helped pull it up.

It has been all hands on deck.  Not only has Chuck been pitching in, but so have Megan and I.  Megan is the official dish drier!

Besides personal care for Grandma, there is laundry, housework, grocery store runs, and on the good days for Grandma there is plenty of visiting.  We not only want to meet her physical needs, but also want to spend as much quality time with her as we can.

One evening we were leaving she was having a good evening and she mentioned she wished she could go with us because she wanted to get out.  I reminded her that she had been out that morning to go to the doctor.  She made a sour face. Ha!  I agree that going to the doctor doesn't count as an outing.  Anyway, I told her we would take her out to Cracker Barrel the following Friday if she was feeling well enough for the outing.

When we arrived on Friday she was alert and ready to go.  I was surprised since the day before she woke up in a confused state and didn't recognize her daughters.  Anyway, she was happy to be out of the house and ate better than she had in weeks.  I'm not sure we will be able to take her out again.  The trip was tiring and getting her in and out of the car caused her some pain. 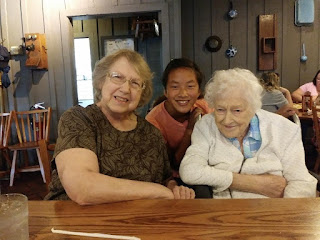 We are taking things day by day and cherishing each moment we have with her.  If I'm not around this little space you'll know that I'm off serving at Grandma's.