I tackled the rest of the closet that is our little office area. After Christmas I wasn't feeling well and stacked the books I had received haphazardly in there. Along with a few other things that weren't in their proper place. 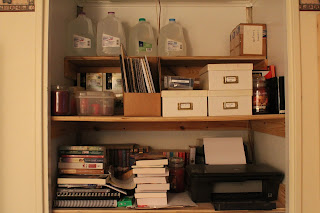 I took it a shelf at a time and pulled everything out. I had been stacking Megan's schoolwork in there. Yes, I know she has been in school for five months. Sigh. I took the time to sort it and put into a binder. 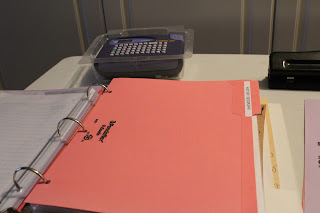 As I was sorting the books I added some to my sell bag. I had already read a few of then that I had no interest in keeping. I also had been given a few that weren't my taste. 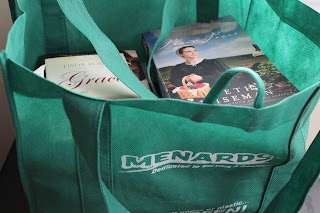 I moved a few things around. 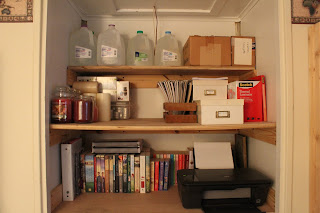 Awww, so much better. 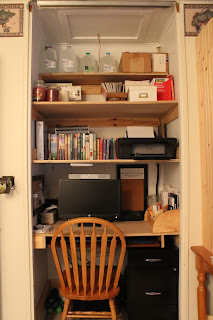 I know this closet is rough.  When we made into our office area we moved shelves and never took the time to patch holes from where they previously were. There is also some missing paint that come off when the shelves were moved around. This area is on my list for a mini makeover this year. At this point pretty isn't my goal. I am working on culling things and organizing. Pretty will come later.
Next on my list was this cabinet in the kitchen. 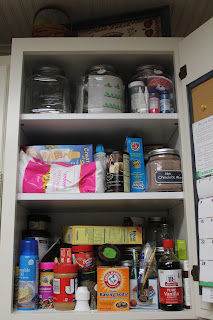 Not everything had been put away after my trip to the grocery store and all of the Christmas goodies had been baked. Things were put into their proper place and a few things were tossed. 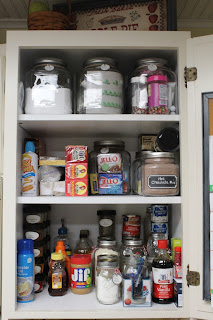 Now I feel like I can take a breath when I open the cabinet door. No longer do I fear what might jump out at me!
What project have you tackled in the last week? Tune in next Tuesday to see what homemaking debt I tackle.
May your day be filled with joy in the journey!