Cooking without an Oven

It seems like it's going to be one of those years where things break. I could get upset and pout and say "Why does this keep happening to us?" Nope, I'm just going to keep rolling on with this great life I've been given.


After blowing the budget on eating out I had been great at cooking and even sticking to my menu. Enter a Friday evening. I was prepared. I hit the grocery store that morning and was meeting up in the afternoon with my parents and aunt. I knew the day was going to slip away so I planned ahead and whipped up a homemade pizza to pop into the oven.


All was going well until I keep checking it and the cheese was barely melted. In a little longer and still it wasn't done. That is when I called in Chuck and we realized that even though the oven was heating it wasn't heating to the set temperature.


By this time it's almost 7pm. We are all hungry and I might have been getting to the point of grumpy. We hopped into the van and headed out for Chick-fil-A. Now I love myself some Chickie Lay! It was delicious and we enjoyed ourselves. Although I wasn't happy that once again we were blowing the budget.


Saturday Chuck did some trouble shooting. Our stove is almost 16 years old so we knew it wouldn't be smart to put a ton of money into it. After some other large expenses (hello septic!) we didn't want to buy a new stove! Thankfully Chuck tinkered around and found that it could be repaired with a part that is under $30. Yes, we'll take that!


He called to make sure the appliance part store had the part and headed out to get it. He arrive there at 1:15. Can you guess what time they closed? If you said 1 o'clock you are the winner!!


I was able to pick the part up Monday. Due to all of his overtime, Chuck didn't have time to get to this right away. The menu had already been made for the week and I didn't feel like changing it. The solution/challenge was for me to figure out how to stick to my menu without an oven.


Sunday beef stew and homemade bread was on the menu.  Since the stove top works there wasn't a problem making the stew. Now the bread was another issue. I did a little research and decided to try making bread in the slow cooker. 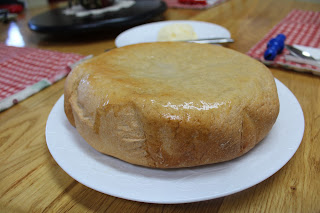 Sadly, I don't recommend this recipe. I found it to be heavy. I do love the idea and it is something I might play with in the future.  We'll see. 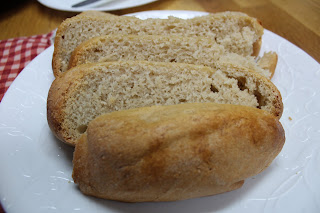 Tuesday lasagna, salad and garlic bread was on the menu. Hmm... now this could be a problem.  I had never made lasagna in the slow cooker, but why not? 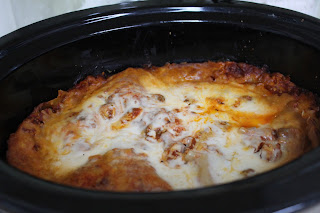 This is where I got the idea, although I didn't use her recipe.  I used my own recipe. I sprayed the crock pot with cooking spray and it made clean up super easy.  She suggested you cook it 5-6 hours. I found that it was ready at 5 hours.

I imagine I will use the oven to bake it most often. The reason for that is that when you bake it you remove it from the oven and allow it to set before you cut and serve. In the crock pot that wasn't possible so it fell apart when I plated it. The taste was great.  The ease was great. I can see myself doing this in the summer.  I won't have to heat up the house by turning on the oven and I can throw it all together before we head out for an afternoon of swimming. This is a keeper!

As for the bread I pulled out my trusty griddle and grilled it. I would be fine without the bread, but when I mentioned that to hubby you would have thought I was suggesting something criminal. *smile* 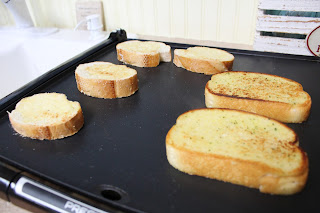 Cubed steak was on the menu for Thursday evening. I generally cook it slowly in the oven. Not happening this week. Can you guess how I cooked this. Yup, the slow cooker. 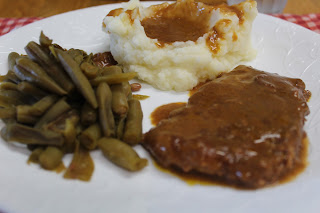 Very, very good. Super tender and flavorful. Both Chuck and I agree that this will be the go to method for making cubed steak.

I'm happy to report that the oven has been repaired and is back in service. However, it was good to challenge myself and to know that no matter the circumstances I can continue to serve a hot, hearty meal to my family.

When life gives us a lemon lets not make a pucker face. Instead take that lemon and create lemonade, lemon custard, and lemon cake!


May your day be filled with joy in the journey!