As I was slicing watermelon I was thinking of our dear neighbor Bill. He was close to 80 when we moved in and he was quite the character. He went to glory severval years ago and left a huge impact on us. He enjoyed sitting out on his back porch. If you caught him at the right moment he would tell us stories of years past. 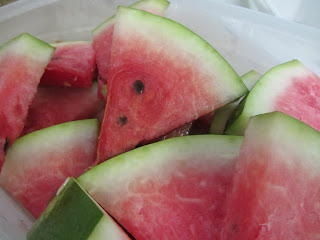 One of the stories he told was about his childhood during the Great Depression. His family left Indiana to visit family in Kansas. He said that the entire time they were there all they ate was watermelon and fried chicken. He said that they would pick the melon straight from the field and dig in. As a little boy he thought it was the greatest thing ever!

He didn't realize until he was much older that they ate watermelon and fried chicken because that is all there was. It is hard for me imagine times being so hard that you eat the same thing over and over for days and days.

As a little boys it was a great adventure for Bill. He had all he needed; a full belly and the love and security of family. It serves as another example of how the simple things really are the things that matter.