It had been ten years since I had been to Virginia. Although I still have family there I know that with Pops passing I may never return. I have deep roots there and knew I needed to take some time to chase them down.

My great grandfather Donohoe grew up on a farm that was about 800 acres. He ended up married to a neighbor girl, Carrie. Carrie and her sister Cora lived with their parents on a 300 acre farm. Seeing as how Cora never married the land ended up in the hands of my great-grandfather Donohoe.

When my grandparents, Mom & Pop, married they ended up settled in a home across from the home Carrie and Cora grew up in. For years they were neighbors to Aunt Cora. They lived there from '40's until Pop's brothers forced a sell of all the land in the '70's.

The place we refer to as the old place or the farm is where I will begin. Aunt Cora lived in her childhood home all her life. When she passed away no one moved into her home. No one did anything with the place including clearing it out. My mom said she has no idea why. She said growing up there was even home canned goods still in the cellar. After the farm was sold Aunt Cora's place was bulldozed. Luckily for us it was dropped and there most of it lays. 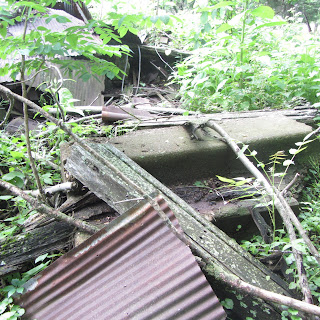 Chuck and my mom climbed up the debris and did a little digging. There were able to pull out bits and pieces. One of the things they found were bricks from the chimney. Considering the bricks are over 100 years old they are in great condition. Full bricks that didn't even have mortar on them. 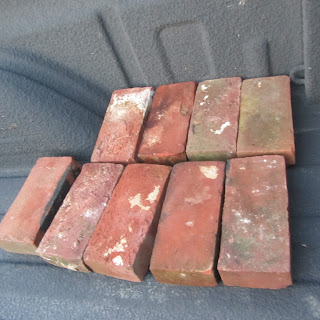 We took enough for all of us, including the grand kids to all have one.  The younger grand kids didn't quite understand why we wanted bricks.  I know that in time they will cherish the link to their past.  It was like the bricks had been waiting for us!

Not far from Aunt Cora's Pop had built a small barn for the cows. 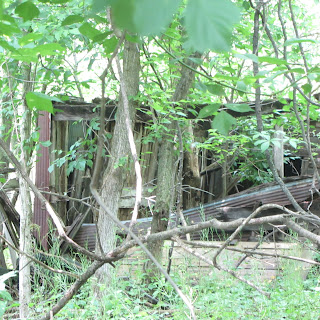 The barn is still standing and as we looked over my sister spotted a bucket that had been turned over the fence post! 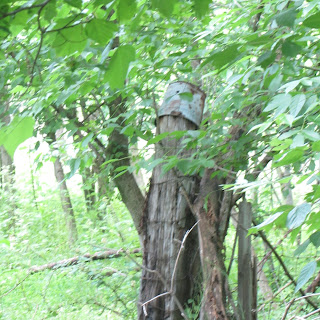 So many questions.  Who put the bucket over the post?  How long had it been there?  I know that it had been there for a while as the bottom is no longer in tact. 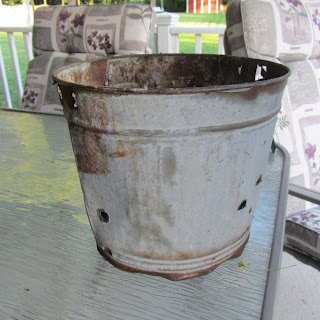 There was a door leaning against the barn. 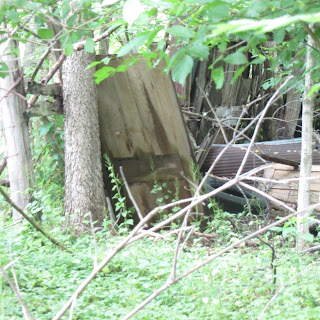 Chuck said that it was perfect.  No rot and it looked like it could have still been used.   There was part of the door lock still on the door and Chuck took it off for me. 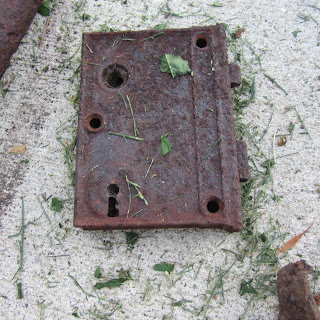 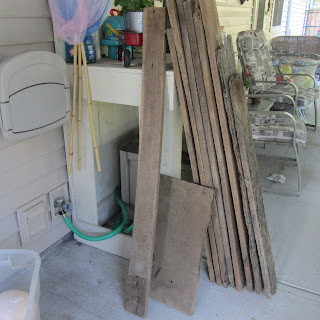 In front of Aunt Coras were a stack of stones.  Mom said the stones were part of a fireplace.  A fireplace to slave quarters.  I debated if I should share this.  I know it brings to mind different emotions from different people.  What I will say is that although I don't think it was right to own another human times were different then.  From dates it looks like that occurred when my great-great grandparents ran the farm. 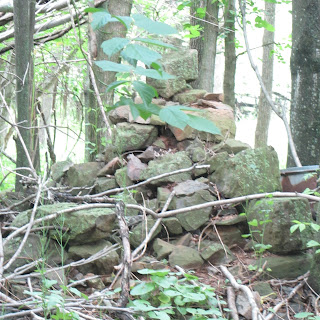 This area must have been used for dumping or storage.  There were many treasures uncovered in this area. 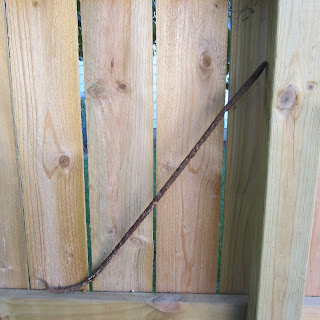 This poker was a favorite find of moms. 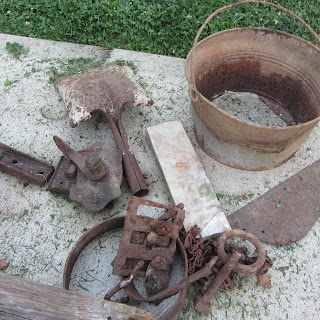 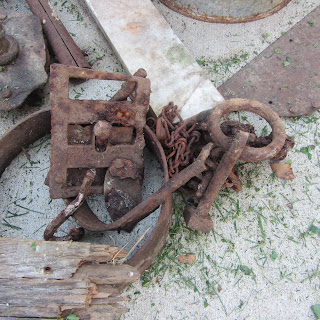 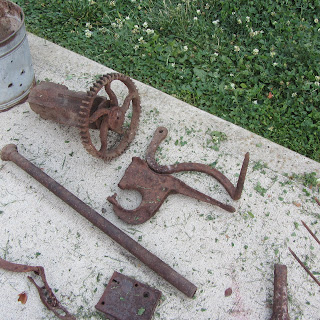 The home where mom was raised is no longer there. When it was demolished the debris was cleared away.  Chuck did go to that area and found a couple of things. 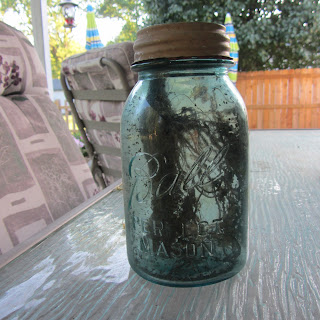 He found one of my favorite type of Ball jar.  I will always wonder if Mom (grandmother) used this jar.

He also found this bucket.  The bottom is missing and I plan to use it as a planter. 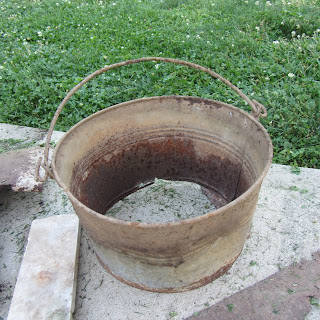 Around the old barn this jug was found.  Pop use to make homemade root beer.  Could this jug have been used for that? 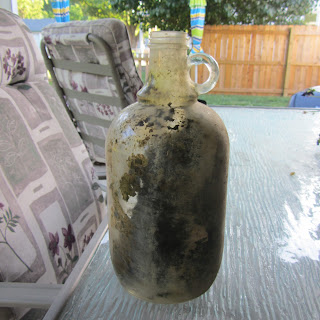 An old pully wheel was found.  I am not sure but I think it had a leather belt that ran around it to operate machinery. 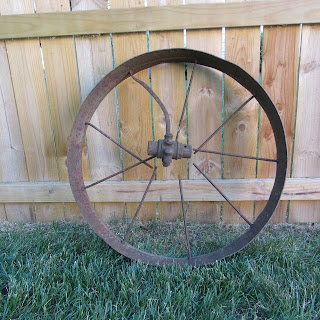 I imagine many would see these things as junk. I see them as a link to my families past. As sad I am that the barn and house were no longer standing I am glad that we went there. It gave me some closure and I am happy to have shared it with Chuck and Megan. If you made it to the end of this post... thank you for sharing my journey. May your day be filled with joy and contentment.