On Friday my neighbor called to asked if I had seen what was in the backyard. I walked to the kitchen window and said "Oh my!" as I looked out. 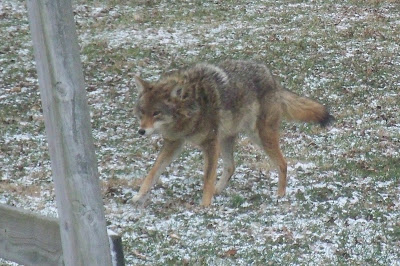 Yes, that is a coyote!! Saying I was a little shocked is an understatement. I talked to a biologist at DNR (dept natural resources) and was told there are a few reports of a coyote attacking small domestic animals. I was assured that unless cornered the coyote will not attack humans.

We plan to be alert and hope he has moved on and we will not encounter him again!