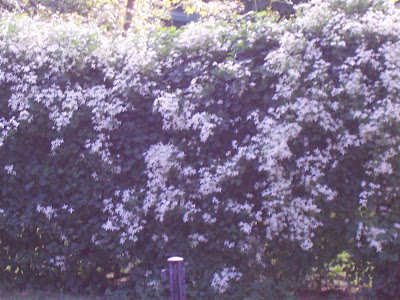 Over the weekend our neighbor, Bill passed away. He was 85 and had been bedridden for the last year or so due to a stroke two years past. He was a great neighbor! His favorite thing to do was sit out on his back porch. He liked to yell over at us and ask us to come sit a spell. He had great stories. He talked about visiting family in Kansas during the depression. He thought it was fantastic that they had fried chicken and watermelon the whole time they were there. He was just a boy and probably didn't realize that was about all there was to eat.

He lived a fascinating life. He had gun shop in California during the sixties where he raised three children. He and his first wife divorced and several years later he married Celia. I often wonder how they got together since she is an Indiana girl. I never asked since I thought that would be rude.

Bill and Celia were married for 23 years and lived in a number of places. They farmed in Oregon, ranched in Tennessee and then traveled in a motor home before settling back in Indiana. Not many people can say they have lived such a broad life.

He has a vine growing on a section of fence between our property. He once told me that the vine had been in his family for 100 years! Everywhere he went he took a piece of it with him. I don't know what it is called, but I think of it as Bill's Vine. If we ever move I will certainly be taking a piece of vine with us. We loved Bill and he will be missed!