Come in and take a look at the changes in my bathroom. 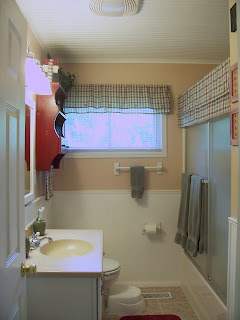 Remember when I posted about a shelf I got from my father-in-law? Well, it was the inspiration to finally decorate the bathroom. Here is the shelf before... 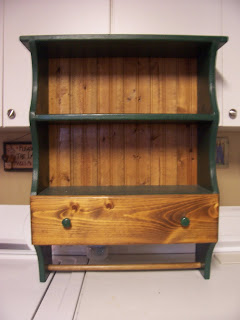 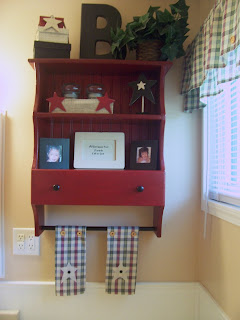 I had purchased three valances to use in the bath, but after putting them up I realized that two curtains above the shower was to much. I had saved the extra valance and used it to made these towels. 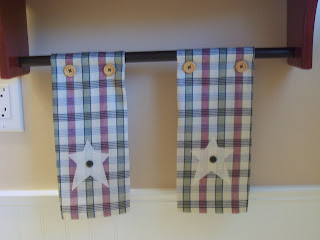 The items on the top of the shelf were previously in the bathroom. They sat on a single white shelf that I was never in love with. 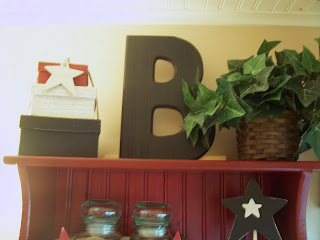 Here is the middle shelf. The glass jars were in storage. I pulled them out and my wonderful hubby used scrap wood to create the box they are sitting in. All of the stars were pulled from my craft stash. The black star started out as just the star without the stand. The scale was off so I found a dowel in the garage and had Chuck cut a scrap to make the stand. A little hot glue and it was perfect. 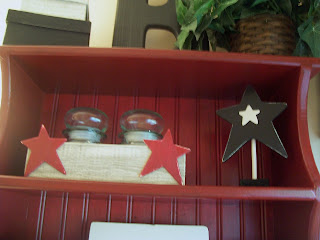 For the bottom shelf I used frames that were in my craft stash. The frames were very inexpensive to begin with. I think they were all $1 at Michaels. I gave them a coat of paint and I stitched the saying "All Because Two People Fell In Love." I put bathtime pictures of my sweet girl in the other frames. That is were I spent my 62 cents. Printing out the pictures! This sign is hanging on the same wall as the above shelf. It is above the mirror and a couple of towel racks. 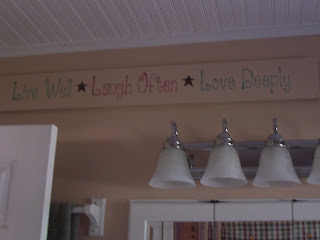 I used scrap wood and the stencil belongs to my sister. It turned out much better then I imagined.

This area is on the opposite wall from the above shelf. 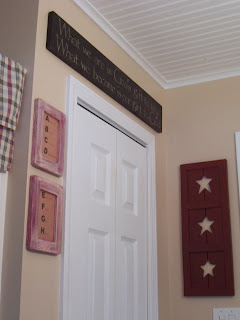 To disguise the top of the ugly shower doors I hung a valance. The signs are made from frames that again were in my craft stash. 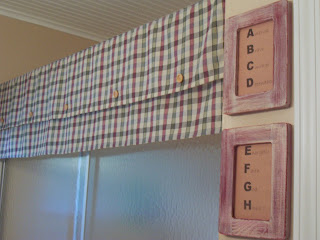 Here is a close up of the signs. I wanted them to look like they could old slates. I really wanted to use black paper and white lettering, but my printer would not do that. 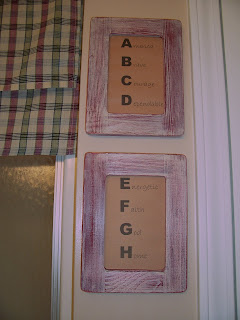 This sign hangs above the closet door. It was a Christmas gift from Chuck. It was made by the very talented Kindra. 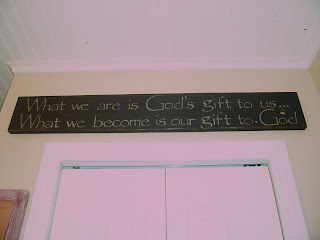 Last but not least is this shutter. This is something that was already in the bathroom. It was already red, but not quite the same as the large shelf. I gave it a coat of paint to make it match. 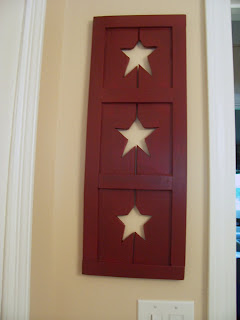 I hope that you enjoyed the tour!