Chuck called yesterday and suggested that we head to the mall for dinner and take Megan to build a bear. Sounded great to me!

After a great dinner we headed to Build a Bear. Megan wasn't sure what was going on when she was filling up the bear. After we moved on to the grooming area she started to have fun. 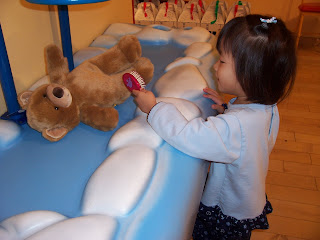 If we would have let her I think she would've stayed in this area all night. We picked out clothes that made her bear a ballerina and moved on to the naming station. She thought Bear was an appropriate name for a bear. 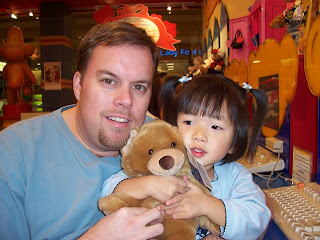 After Daddy and Megan finished Bear's birth certificate we headed off to a few more stores. It was so nice. The mall wasn't crowded and we were able to enjoy the music and the beautiful decorations. Thanks for a great evening Chuck!