Yesterday I was talking to my mom and she said that she was sending Dad over with two leftover uncooked chicken breast. As we were chatting I told her that spaghetti was on my menu. She suggested that I use the chicken to make chicken parmesan and serve it with a side of spaghetti. Wonderful idea! Especially since that is my favorite dish when we go to Olive Garden. 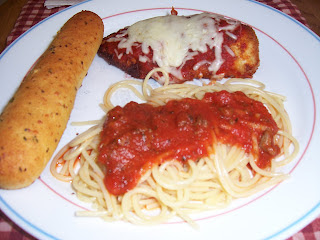 Here is my version:

Take two chicken breast and dip in milk wash (that is just an egg and milk mixed together). Coat chicken in bread crumbs that have been mixed with some parmesan cheese.

I then browned the chicken breast and put them into oven at 400 degrees. I let the chicken bake for about 20 minutes. I then spooned on some spaghetti sauce and returned to the oven. Once the spaghetti sauce was hot (about 10 minutes later) I sprinkled with mozzarella cheese. Bake until cheese is just melted.

I served this with a side of spaghetti and bread sticks.

I had wanted to add a salad but the grocery store by my house was charging $1.98 for a head of lettuce! The store where I do most of my shopping had lettuce for $0.98 the last time I was there. I just couldn't bring myself to pay that much.

This meal was yummy! Thanks for the suggestion Mom.